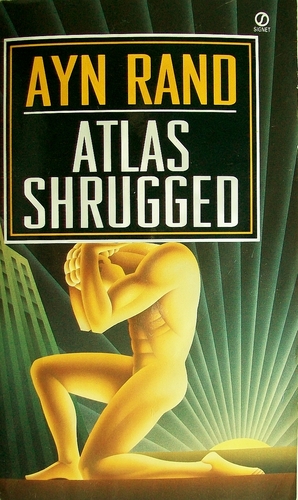 If I were to make a movie based on Atlas Shrugged, I’d ask for all the sets to be made of cardboard – all the buildings, all the walls, all the backgrounds. Paint and cardboard, and only a few solid objects, when they really need to be interacted with. Then I’d ask for actors who look like adventurers and throw them in suits and call them „businessmen”, and for actors who look like bureaucrats and call them „politicians”.

It’s because Atlas Shrugged isn’t a very realistic book. It’s more of an allegory – a monster of an allegory that’s over 1000 pages long in pretty much any edition. It’s an allegory of capitalism and of socialism, with a dash of the ridiculous (some of Rand’s ideas made me simply incredulous), and a lot of repetition of the same ideas, dropped on your head like anvils in cartoons.

But that being said, if you’re up for a challenge, it’s a very intriguing book which is worth reading once in a lifetime for a number of reasons, which are below. It should be taken not with a pinch of salt, but with an entire sack of it.

If you wish to buy it, it’s available as an ebook on Amazon, and as a paperback on the Book Depository, where they offer free shipping in a lot of countries.

Here’s the gist of it: capitalism is good, socialism is bad. Socialism comes in different shapes and sizes, it tries to dictate how people ought to live, it fails to consider individual motivation and psychology and it doesn’t value the person, only the masses. Unfortunately, masses are made of people, so…

Ayn Rand has a lot of good criticism on socialism, really. If you look back on what happened in communist countries (for her I suppose it was looking forward), her points do get confirmed: if there’s nothing to gain personally, individuals will tend to stop trying too hard. The doctrine of taking from each according to their possibilities and giving to each according to their need fails: needs will be misunderstood or exaggerated, those who work will not see the point in working so hard anymore, since there’s nothing in it for them, those who cheat will cheat more and work less… and so forth.

A lot of systems crashed, just as Atlas Shrugged predicted they would crash.

Except… not really. Here comes the cardboard: Ayn Rand believes that people using their brains are rare and that they can be easily brainwashed through universities and, well, osmosis I guess. Whereas in real life, it took a lot of violence to get intellectuals and businessmen to obey communist systems. In Rand’s world, people refuse to think out of a personal choice of sorts – and the whole of US crashes. In the real world, things were worse – and North Korea, which would have crashed in chaos in a Rand-like world, is still a closed and terrifying state.

What really bothers me is the book’s description of capitalism, which is naive in a number of ways: in the capitalist utopia, the „brains” only need to think in order for things to work out: copper mines appear where no copper appeared before, oil is found where convenient, science booms further as if the only thing it needs is a bit of freedom, „don’t die because I love you” is replaced with „don’t die because your life is valuable” and capitalists are brave, wonderful, clever, honest, handsome and lively. As opposed to cowardly, stupid, dishonest, apathetic socialists.

Worse, happiness is presented as a goal in life and as the validation that one’s life is worthwhile, since it can (only?) be achieved by producing, creating, meeting one’s goals. Rand’s socialists are a miserable lot, incapable of enjoying life and sometimes even incapable of having sex, because it would be a joy and all joy is denied them. This is why the book needs to be considered an allegory, as far as I’m concerned, because taken literally it would validate psychos and cheats who are very happy about what they do.

By the end of the book, I found Rand’s capitalists annoying to no end, especially considering their tendency to snap the sign of the dollar onto just about everything, from cigarettes to graffiti. Enough!

The plot isn’t bad and if Rand kept the novel *a bit* shorter and wrote a bit better, Atlas Shrugged might actually be a page turner. The main character, Dagny Taggart, is a heiress and the Director of Operations in charge of the largest train company in the United States (in this world, trains take care of most of the necessary transportation, so it’s a Big Thing). Unfortunately, her brother, James Taggart, is the actual president of the company and he’s an inept fool who wants to help people and appeal to the masses, and who has no idea about how to run a company.

Things in Washington are getting pretty bad as a lot of socialist decrees are passed, making life hard for the businessmen who actually achieve things in the favor of the businessmen who don’t – at least apparently. For example, they limit the production of some companies so that others may have a fair chance to make a living – unfortunately, the ones that „don’t stand a chance” are putting out faulty products, or don’t honor their orders on time or at all, or have other issues. The imbalance created by decrees like this one puts more and more of a strain on previously safe businesses and eventually makes them crash.

To top it off, people of ability keep vanishing all over the place. So we get to see a lot of Dagny in action, trying to save her trains and to keep the world turning in the face of ever-worse odds. Trust me, you will give a damn about trains by the end of the book. I didn’t to start with, but if I said I wasn’t cheering for Dagny after a particular achievement, I would be lying.

It’s a bit of an adventure business novel, combined with cleverness and some mystery and action, with a dash of romance. Some of the twists and turns are subtle, unpredictable and interesting, which would makes this a particularly cool novel, but…

Rand likes to comment on capitalism and on the importance of intellectuals and of thinking everywhere. She’ll often go on and on and on about the same ideas in a gritting, repetitive thing. Towards the end, there’s a whole chapter which reiterates what we’ve already heard throughout the entire novel which is supposed to be brilliant, but it made me cry tears of boredom.

And, of course, some scenes are drawn out and some characters monologue endlessly.

Otherwise, the style is simple enough and readable enough – nothing very special, and nothing abysmal, either. But this is one of the few books where I’m of the opinion that if you really want to skip a paragraph, you should.

They’re cardboard characters, all of the socialists. Their opinions, when you first read them (and you first read them on the first few pages), seem to be sordid parodies of real life instead of the opinions of people. And I’ve already complained about the perfection of capitalists.

However, once you get used to them, they have their more subtle parts as well, their little things which make them three-dimensional in their own parallel universe in which the world is different. You can see the evolution from guilt to self-assured confidence of Hank Rearden, the downfall of James Taggart, and of the scientist Robert Stadler, in ways which make sense, and which make them interesting. Unfortunately, sometimes the unrealistic universe in which Atlas Shrugged takes place means that the capitalistic men sometimes come out looking like wimps, but thankfully it doesn’t last *too* long.

The only character whom I really disliked was John Galt, who’s a lot more interesting as a mysterious name everybody keeps repeating that as an actual presence in the story. He’s an incarnation of Rand’s capitalism and as such he is perfect, clever, fearless, handsome, desirable, prone to monologues, and generally two-dimensional. Which is a pity.

Also, the only competent woman in there was Dagny. There are some mentions of other capitalist women (in one or two whole places!), but for some reason Rand doesn’t bother too much about them. Because… I don’t know. Whatever. Maybe she didn’t want her main character to share the spotlight.

She braced her feet for an instant, to resist, but his mouth was pressed to hers and they went down to the ground together, never breaking their lips apart. She lay still—as the motionless, then the quivering object of an act which he did simply, unhesitatingly, as of right, the right of the unendurable pleasure it gave them.

It’s a surprisingly hedonistic novel in places and emotions between capitalists run high. The homoerotic subtext is so explicit that it’s a wonder Ayn Rand herself never caught it. I’ll throw in a few quotes, okay? (because this book doesn’t need a lot of slash fanfic writers to reinterpret it creatively, it already tells us Hank and Francisco love each other)

Rearden’s startled glance at him was like the involuntary thrust of a hand grasping for support in a desperate need. The glance betrayed how much he wanted to find the sort of man he thought he was seeing. Then Rearden lowered his eyes; almost closing them, slowly, shutting out the vision and the need. His face was hard; it had an expression of severity, an inner severity directed at himself; it looked austere and lonely

And then this, same Rearden with the same Francisco:

He had caught himself glancing through the newspapers to see whether Francisco d’Anconia had returned to New York–and he had thrown the newspapers aside, asking himself angrily: What if he did return?–would you go chasing him through night clubs and cocktail parties?–what is it that you want from him?

More Rearden and Francisco, with Francisco calling Rearden his best and greatest conquest:

„What are you doing at this party?”

His face suddenly earnest, Francisco answered gravely, almost solemnly, „Yes–what I think is going to be my best and greatest.”

Dagny and Rearden about Francisco:

Yet, when I look at him, I feel that if ever there was a man to whom I would entrust my life, he’s the one.”

She gasped. „Hank, are you saying that you like him?”

„Yes—I think I have.” He smiled. „Why does it frighten you?”

Let me guess: it frightens her because she’s sleeping with Rearden, who’s going around confessing his love for her ex. I’d be a bit worried that I’d be left out, if I were her. Just saying.

Anyway, there’s more to the Hank Rearden/Francisco d’Anconia relationship, with some life saving and apparent (but not real) betrayals in there, as well as other romantic tropes. It’s quite fun to read, because it’s either the best friendship of all ages, or two guys having the hots for each other without the author noticing.

A book that’s stuck in limbo between good and bad, but it’s one of those stories I’d recommend for people with more than a bit of patience. The plot and characters are often interesting in their own parallel universe sort of way (unless Rand does things to them in the name of ideology), even if the style is enough to make you headdesk and some of the ideas are silly no matter how you look at them.

One thing Atlas Shrugged does right is to make you feel passionate about achieving things and exercising your freedom of thought. It’s that sort of a book.

So, again, if you’re into literary masochism for a good purpose, I recommend it. And yeah, it’s available as an ebook on Amazon, and as a paperback on the Book Depository (where they offer free shipping, which is why I’m not recommending the Amazon paperback, unless for some reason you want that).